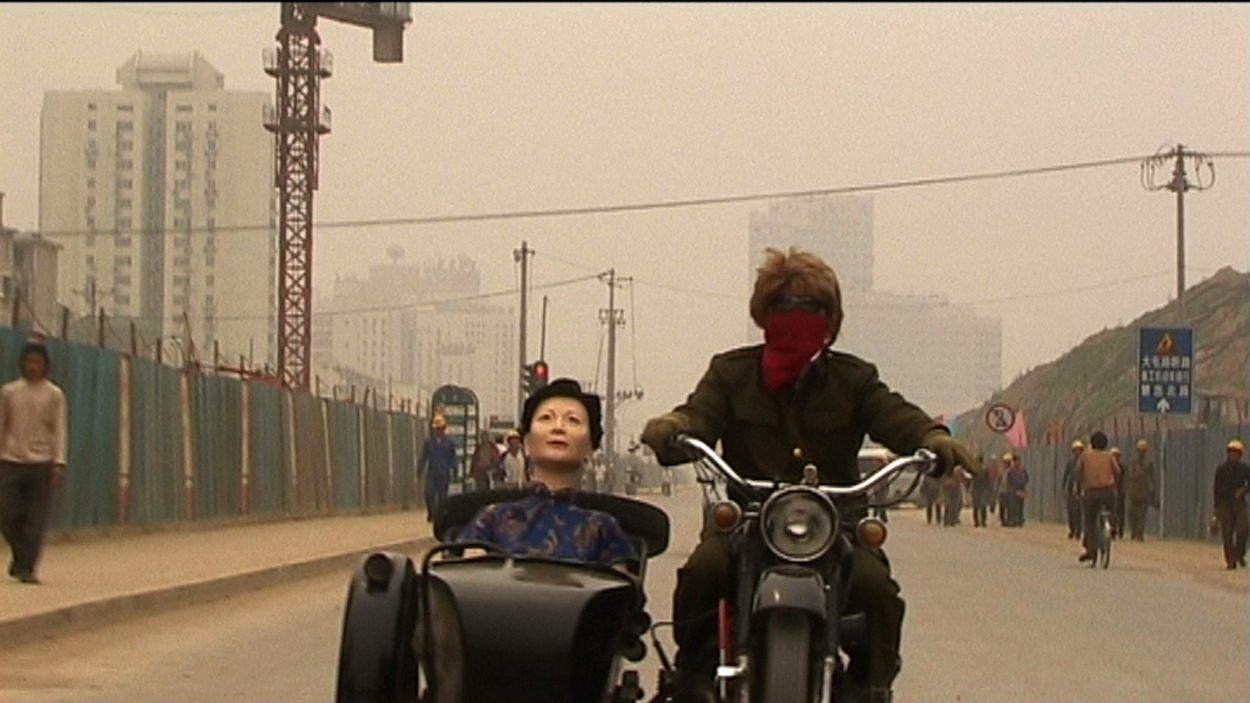 BEIJING HOLIDAY is a fairy tale. An ironic adaption of William Wyler’s ROMAN HOLIDAY featuring Audrey Hepburn and Gregory Peck. BEIJING HOLIDAY is a romance between the former first Lady of China, Soong Mei-Ling and the filmmaker Edgar Honetschläger. He, the Westerner, guides the sophisticated Lady Chang Kai-Shek through a thriving Beijing, showing her, what the very communists that won out against her, are doing at present. Nonetheless BEIJING HOLIDAY isn’t a cute puppet show. The film, by means of symbolism and metaphors, utters harsh criticism on how “naive” the West is dealing with mainland China. The filmmaker is not in favour of Soong Mei-Ling (even though he has to admit that he fell for her as a man), the Kuomintang or the ruling party of Taiwan. BEIJING HOLIDAY deals with the “fetish politics”. The film clearly states: Art need not be political, but it is a sign of a “sane” society, if the arts can be.

If you are interested in the full movie please send a request to edgar@sil.at

The case with the master tape, a DVD and and a print out of Madame Chiang Kai-shek in heaven.

The National Palace Museum in Taipei holds 700.000 artefacts that General CHIANG KAI-SHEK had taken with him from china when he fled from the communists to the island, formerly known as Formosa. He turned the island into the Republic of China against the main lands People’s Republic if China. Until today China claims that those artefacts were stolen and they rightly belong to the mainland. Sure – MAO who’d killed 50 million intellectuals during the cultural revolution had 5000 years of Chinese history erased. Had those pieces fallen into the so called revolutionary’s hands none of these pieces would exist anymore. If you want to learn about the historical glory of China, about Buddhism etc. you need to go to Taiwan – on the mainland it has all been destroyed. Kids in mainland schools do not learn anything about China’s past – for them history starts from after the Cultural Revolution… well once the museum for the artefacts had been set up madame Chiang Kai-Shek who had been educated at Wellesley College in Massachusetts became its director. Her father had lived in the US as a young man and had made heaps of money selling millions of bibles in Chinese language to the Chinese people and he had been a major sponsor of the anti-communists. Miss Song Mei-Ling, later Mdm Chiang Kai-Shek, had wanted to talk the American people to move their interest during WW2 away from Europe to China and help set China free from Japanese occupation. The owner of TIME LIFE magazine who gave in to her charms had sent her on a PR tour from NYC via DC (where she spoke as the first woman ever and on top of it Asian in front of the senate) all the way to the Hollywood bowl. She was good looking, super smart, spoke American english accent free and was full of charisma. She went on a promotion tour in favour of a free China. She was so famous back then that she was mentioned in Hollywood films etc. She was for sure the  most famous Asian woman in the USA at her time. When i saw her the first time I fell in love with her and her courage. I decided to make a film about her for the museum in Tapei, well honestly I’d wanted to make a movie that would criticise Western intellectuals and artists in how they were dealing with China. Unreflected most of them would take the money from a regime that would kill dissidents.

As soon as I had figured out what I wanted to do i tried to find people in Beijing to help me. No chance – they all called me insane. For my movie i wanted to turn the courageous first lady – who had long passed by then after she had made it to a 103 – into a doll and i drive with her on a motorbike though Beijing (the Austrian Ambassador called me crazy) in order to show her what the communists had done to her country. i dyed my hair as a reference to her having loved white blue eyed blond men… at the end of the movie I put her on Tiananmen square (the square of heavenly peace) where the Communists had slaughtered the students in 1989. Back then i was living in Williamsburg/Brooklyn and I’ll never forget the images we got to see on TV – the brutality… Well, I did drive with Madame Chiang Kai-Shek through BEIJING and then I put her on Tiananmen Square right in front of MAO’s image at the entrance to the forbidden city. We put a red ‘MAO Bible’ into the doll’s hands to make sure that they would not bust us right away. No Chinese had been willing to help make this movie but my Japanese assistant (a buddhist monk) who spoke Chinese very well had found a Japanese/European crew – among them a fantastic brave camera lady from France and we filmed Mdm Chiang Kai-Shek there – right at the spot where the communists had killed so many students who had been fighting for freedom. As some of the surrounding very young red army soldiers asked us who the doll was (they were very suspicious). My assistant told them that it was his diseased grandma from Japan, a communist, who had always wanted to visit Tiananmen square.

For the Taiwanese Mdm Ching Kai-Shek is the mother of their nation but for mainland Chinese she is the incarnation of evil – 1.3 million Chinese learn that in school. For a bit of objectivity one has to say that her brother used to be minister of finance of China before the communists took over and no doubt her family was so corrupt – one reason why the communists could take over… I remember vividly when the director of the National Palace Museum Taipei learned that i had done a political film for the group show including Tsai Ming Liang, Apichatpong Weerasethakul, Yael Bartana and Deborah Stratman. She asked the curator to be shown the movie upfront. The curator, dutch, protestant, uncompromising would say: ‘Mam, sorry, according to our contract we have no obligation to do so. You will get to see it at the pre-opening.” All her arguments would not soften his position. I guessed that this upper class anti-communist lady had been trained in Tokyo, like the entire Taiwanese elite. Therefore i addressed her in Japanese language, knowing that if it worked this would create solidarity – no more i’d be the Western colonialist and invader but speaking the non-western language of the upper-class would surely make her react differently. It did.

At first her facial expression reflected astonishment, then she switched back to cool, her Japanese being much better and more sophisticated than mine. She told me that she had gotten her academic degree at the Imperial University of Tokyo. I told her that i respected her position and she said: “You are aware of how many nuclear war heads are directed against us by mainland China in this very moment? I hope you did not do anything that endangers our people.” I assured her that my film was political but at the same time very charming. I had hidden the message carefully and it was primarily criticizing the West . She wanted to see. We met at her office which used to be mdm. Chiang-Kai-sheks office (how exciting) and she, surrounded by all her aides had the screen switched on. Before i pushed the start button I’d say: ”Mam, the arts are free, also in this country, but for sure if the content of this movie is going to trigger a major political crises then we gotta think together what to do about it. by the way, the film is based on william wyler’s ROMAN HOLIDAY.” She smiled. Everyone in Asia knows and loves this movie with Gregory peck and Audrey Hepburn. So we all got to watch my movie in the first lady’s office. You could have heard a needle drop. I was observing the museum director for those ever lasting 13 minutes – a member of the anti-communist party. Sweat built on her refined forehead and came running down her neck. At the end of the movie there was a long silence in the sacred room. Wordlessly she gazed at me and whispered: “This ain’t easy but it is ok.” We showed the movie together with other brilliant pieces and alongside the cultural legacy of China.

BEIJING HOLIDAY did cause a riot in Taiwan – not for it’s political content but because in the movie the filmmaker and actor kisses the mother of the nation – a doll – a sacrilege. It triggered a discussion in parliament if this was to be accepted. Art is not exactly being talked about on a daily basis in Taiwanese parliament. And yes, it was harshly criticized but accepted. Democracy. As a gallery from Taipei brought the movie to the art fair in Shanghai it was confiscated even before the show opened. 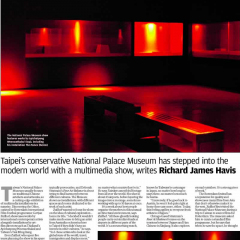 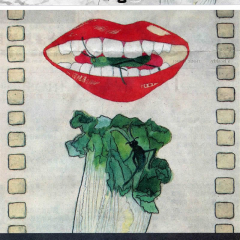 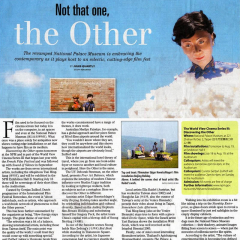 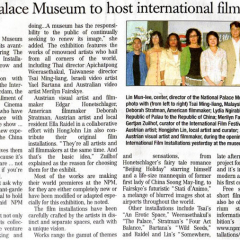 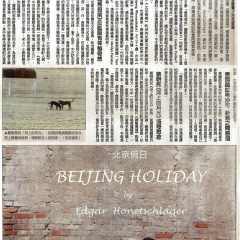 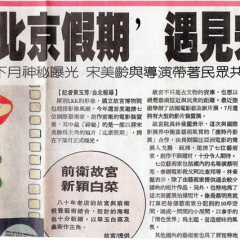 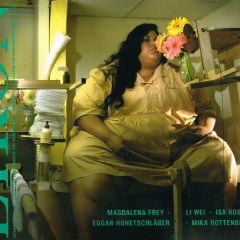 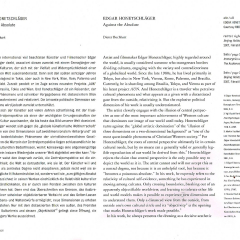 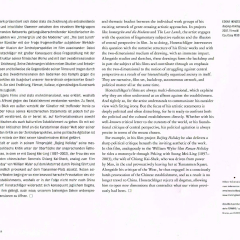 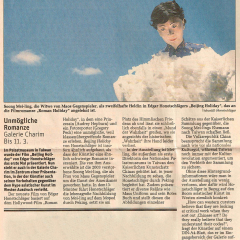