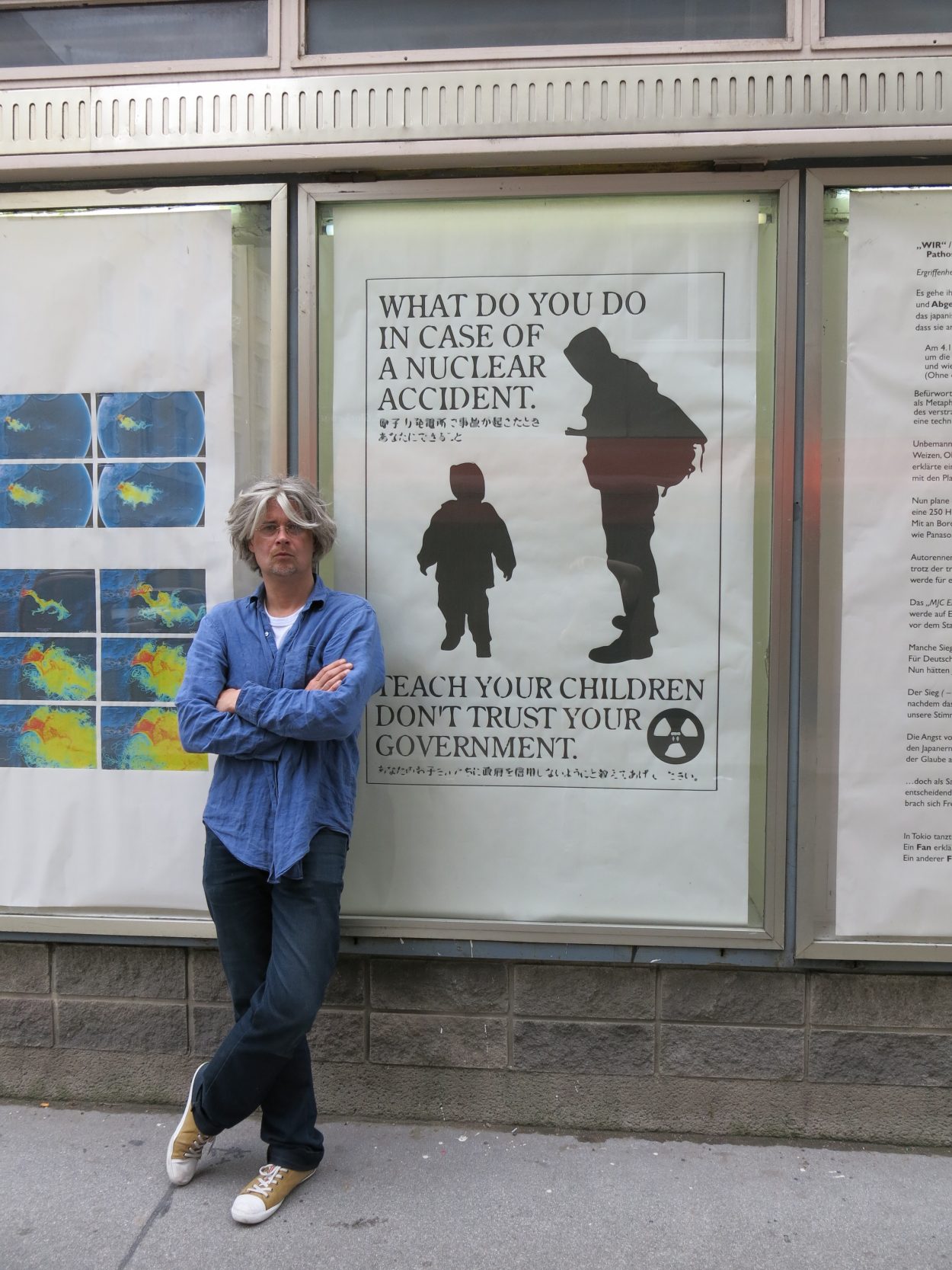 Edgar Honetschläger is a visual artist, screen writer, filmmaker and environmental activist born and raised in Austria. In 1989 he moved from Vienna to NYC and in 1991 on to Tokyo which remained his home base until 2011. Since then he commutes between Vienna and northern Lazio (near Rome). Projects of his participated in art events like documenta X as well as international film festivals like the Berlinale. 2006 he founded the EDOKO Institute Film Production Ltd. Vienna, 2018 the non-governmental-organisation gobugsgo.org.

For detailed biography please scroll down

“In 1991, when the second gulf war started, the mood in Manhattan was scary. With friends I set out for Washington DC in order to join rallies against the war. It was the time of the economic bubble in Japan. Nippon believed that it could outdo the USA economically, Japanese companies bought up important American symbols like the Empire State Building, Columbia Studios which were then renamed as Sony etc. As a consequence there was serious Japan bashing in American politics as well as in the media. But in Manhattan more and more Japanese galleries, art dealers popped up etc. One of them discovered my work and said: “You deal with space like a Japanese, it’s so close to our aesthetic feelings, you should go to Japan.” Completely turned off by the US because of its political arrogance I borrowed money from a friend to pay for a flight to Japan. When i arrived something strange happened: at NARITA airport i felt like i was at home. A feeling i hadn’t known before, because i’d never felt at home in Austria. I’ve never felt at home anywhere. i don’t trust people who claim to love their homeland. What’s that supposed to be? The concept of nation, which occurs very late in the history of mankind, needs to be rejected, because it’s dangerous. We should only differentiate in cultures. Some cultures one feels closer to. From the very beginning i’ve felt very close to Japan, and that’s how it has remained to this day. See my movie MILK.”

In his artistic practice Honetschläger focusses on questioning cultural givens, the concept of individualisation and man’s concept of nature. Honetschläger: ‘My work has a very anthropological approach. It’s preceded by lots of research. In its appearance, it is like a pond, beautiful and still, but the pond is deep – you can only understand the depth when you dip your finger into it, more so if you completely dive into it. I am perhaps playing a game of seduction – the surface draws you in and when you’re ready to go into it, the piece takes you along and literally opens up your eyes and mind, which is particularly true for my films but also for the installations/performances. The base to anything I do is the drawing – it all starts with a drawing. My paintings are like drawings too. And they always serve a purpose. I mean, I could never go to the studio and just paint. For instance the PORTRAITS series is conceptual painting that has been ging on for over 30 years. I love projects that occupy me for many years, even for decades.”

Honetschläger compares without being judgemental: “It is evident that every culture is shaped by an outside and inside view. Perhaps reflections from outside are not always equally effective, but over the decades and centuries they leave traces. It’s not unusual for an outside view to be deeply internalised to a point where it is being understood as an unambiguous inside view, in other words as a trademark of a culture. The outside that brought in the element has forgotten or does not even know that it brought it about itself. In the course of time, the original changed so much in the hosting culture as it has been adapted to the local colour to an extent where the original is no longer recognisable. This gives rise to EXOTICISM, because when visiting a foreign culture one will say: “Look – how bizarre, it’s weird”, yet one does not even know that the gadget or RITE one observes/discovers in the foreign CULTURE has been invented by one’s own ancestors. Globalization has always existed, it is not a 20th-century invention.”

One of the recurring themes in Honetschläger’s work is an ongoing fight against central perspective: “In Western painting, space is created by adding, in the East by omitting. We invented central perspective and are mightily proud of this mathematical principle. In japan, painting has always been flat. On a two-dimensional background, perceiving the illusion of 3D is not innate, it’s a learning process, as i already show in my 2001 film MASACCIO and as is one of the big themes in the movie LOS FELIZ. In Japan, on the other hand, one brushstroke on an empty canvas is sufficient and the viewer already gets to see things that are not there. That’s also learned. From my point of view, the space they create is much wider, way more open. In Japanese KABUKI, there’s a figure called KUROKO (black child) – a kind of servant, dressed completely in black, who helps the actors on stage. The Japanese audience simply doesn’t see him. The art lies in blocking out. Or two old men stand leaning on their canes under a blossoming cherry tree, quoting poems about all the beauty in front of them. They do not see the concrete wall behind it and the adjacent parking lot. They block it out, it’s a certain kind of short-sightedness. One only sees what one wants to see. In this respect, i was Japanese from childhood on. Suggesting is always more beautiful than openly and directly demonstrating.

Edgar Honetschläger believes that anything mono casts a threat to the beauty of diverging expressions/believes/languages/approaches toward life, as well as nature: “One can drive individualism (does it really exist or is it just a concept?) only so far as not to hurt other – both human and non-human existences – see SCHUHWERK.” He also feels that Linear understanding of HISTORY is a misconception. And Emotions too, are after all only ideas – see the movie L+R. Honetschläger expresses these believes – most of the time in an ironic way – by means of drawing, painting, film, performance, installation and photography.

“Julian Schnabel once said that anyone who becomes an artist in order to be loved has chosen the wrong profession – this probably applies to anyone who works in the field of the arts. I always hope for a strong reaction. I’m not providing decoration. Art can’t be critical enough. it can say anything, it can do anything, its task is to doubt, to question, to point out, to cut into the flesh. That was already the case with CARAVAGGIO, why should it be any different today? People have always had difficulties with it. The maturity of a society manifests itself in what it can tolerate in terms of self-criticism. Any form of patriotism=nationalism ultimately leads to censorship, absolutism, to dictatorship. Such few countries in the world enjoy democracy and even in those that do we currently have our backs against the wall. Art has to shout all the louder.”

What drove the artist to go into movie making? “Foremost a frustration with the art world. As I’d meet people who worked in the film world I believed that i could find more intellectual integrity there. I’m not talking Hollywood but Japan or Europe. Some filmmakers will wait tables in order to be able to pull together a meaningful short film. In the art world it rather felt like: Let’s make it to the top asap so one can live a cozy life off it. It took me years to realise that in the film world the snake pit can be even deeper. But well, Tokyo stripped me off decent workspace, on the long run it was no fun to paint on roof tops, my apartments were 15m2 (50 sf) and as a consequence I started to write papers for art projects in open space and then scripts for films. After all I had grown up next to the projection room of the non-stop-movie theatre. My mom was working in the office. I got to see Stan Laurel and Oliver Hardy films over and over again. I guess that triggered in interest later on in making films. Yet, my aim was from the very beginning on to break the canon of the classic film narrative. The way stories have been told in film for a hundred years. Painting has been around for thousands of years and no matter how often it has been declared dead it is still being innovative. But film got stuck. It is repeating the same pattern over and over again. Now if one tries to break those patterns one is bound to failure. Radical changes wont work. Nonetheless it is worth a try. My feature films are to be understood as a honest try.