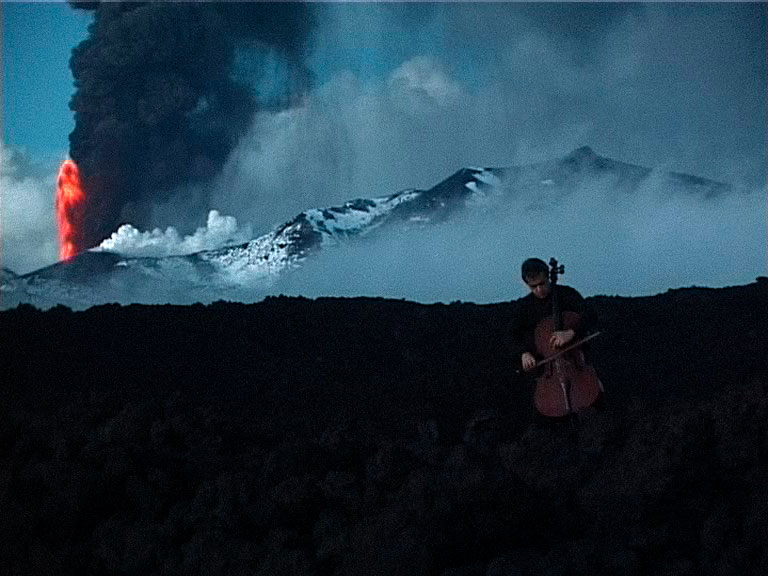 I used to think that GOETHE had written the most boring stories about SICILY – till I met him in a dark mysterious tavern downtown PALERMO. His face showing the traces of decades of alcohol topped by a crown of curled grey hair he invited me to guide me through Sicily. FREDERIC II, Stauffer emperor, came along when we went to visit an ARABIC school, in which the kids were gaily twittering a song of tolerance, while the former mayor Leoluca Orlando, surrounded by his bodyguards, would drag a huge Christmas tree into the salon of his ancient villa. Mount Etna did not want to hear of calming – therefore the star cellist Giovanni Solima had come to challenge him – both erupted – side by side. Next a sign appeared on top of the garbage: non e un film di mafia/this is not a film about the Mafia, that the city had bestowed the sea, just as the “conscience” – the MAFIA photographer – Letizia Battaglia, took a seat. What remains are the musicians, who like muezzins, standing on top of the norman cathedral in Monreale would shout a poem by DYLAN THOMAS into the land that always appeared to me like a big tasty cake laying astray in the sea.

realised with the help of the Ministry of Culture Austria

Below a series of drawings – each of them depicts a scene from the movie.

When a Sicilian says “conscious of identity” it sounds like an Arab mantra. This is probably due to the fact that turning in a circle is necessary for comprehending Sicilian identity: Turning to face all the directions of the compass, to which the mysterious Mediterranean island has opened and closed itself throughout the ages; in a cycle with history, which one encounters there as if it were fused with the present in order to prevent the future.

Soon after the beginning of Il Mare e la Torta, Edgar Honetschläger lets the saints circle far above his head, who seemingly keep watch from a mosaic on a cathedral’s dome over the Christian order considered necessary as part of the never-ending struggle against Islam. But one need only turn in a circle often enough to take in the traces in between monumental ruins and the everyday chaos in the cities, in the faces of the local residents and the words of poets and thinkers to realize: There is proof that Islamic culture is as enduringly immanent here as the faceless Mafia.

The traces which Honetschläger follows on his journey across Sicily and his expeditions through Palermo do not, however, end at vistas providing views of daily life, the island’s history or destinations which could be labeled “insight.”  Rather he falls for the ambivalent flair of places magic where history is refracted in the looking-glass of myths: myths which have been imprinted in the cityscape, living on in tales or as animated movie characters who carry on the magic.

For example, the great German poet laureate, Goethe (Pietro Cacopardo) whom Honetschläger presents as a curious, somewhat lost stranger, straying through the island and never arriving anywhere, particularly not with his shrewd and powerfully eloquent observations of country and people. (One of the locals tells him “Goethe is so fantastic for the German people, but so bad for the Sicilians.”)

Or Frederick II, the legendary Hohenstaufen emperor who seems to dominate the island and its cultural self-image to this day. In Il mare e la torta, however, he remains as iridescently amorphous as the bizarre noises from the Sicilian noise machine that supposedly makes all of the island’s sound. It is foisted upon Honetschläger’s Goethe and other tourists by a sinister peddler. Just as the myths those sounds mingle with history and reflect the present as in a kaleidoscope.

More than just the portrait of an island and its history, Il mare e la torta represents an entire cosmos of atmospheres that Honetschläger captures as a breathtaking ensemble of sounds and images, mirroring them in associative montages of motifs.

The sole monument in this cosmos, which is resisting all of history’s cycles and circular approaches by present-day observers is the Etna. Mighty the smoke-and fire-spitting giant towers from a rugged lava field upon which cellist Giovanni Sollima counters the volcano’s rumbling with an impassioned solo – allowing the viewer to forget the search for reason for a few minutes and sink into a blissful feeling of nullified history.

IL MARE E LA TORTAwas shot with minimal funds in Sicily in November/December 2002 (completion in October 2003). As with the films L+Rand colorsa rather literary screenplay, which provided a rough outline for shooting, came first. Honetschläger’s spontaneous approach toward filmmaking finds its parallel in the uncomplicated possibilities offered by digital technology. Each scene is set up spontaneously with the protagonists on location: A colourful mix of outstanding Sicilian intellectuals and eccentrics who – with great anticipation – were staged by the director. This is what makes the difference from Honetschläger’s earlier films: While this “staging” was rather hidden in the documentary approach, it has now become obvious. The documentary nature was driven into the background, creating an essay in which the filmmaker doesn’t even bother with pretensions to objectivity. Interesting to us was that the form is determined by editing, uniting the pictures into a narrative whole. Honetschläger employs an unconventional method: After shooting, he meticulously analyzes the tapes and transforms every scene, every detail into drawings. He terms the hundreds of drawings he made “frozen moments”, which resemble a storyboard but aren’t. These drawings are sequenced and re-sequenced until the film is ready for editing. However these “frozen moments” and the story found whereby cannot hold up against the running image. Therefore, the pictures and scenes find their final place only through the significant input of the editor, in this case, filmmaker Thomas Woschitz.

From island to island. First Japan, then Sicily, and the similarities are astonishing – Christianity in one place, Buddhism in the other. The characteristic sense of isolation and of an “outstanding status” is the same. The unknown is always welcome and yet the outer world, everything that comes across the sea, is viewed with suspicion. “No one can, no one wants to understand us” is the tenor, though cultural assimilation has proven to be the only effective survival strategy throughout history. Consequently the observer / the new arrival is unable to understand because it is too multi-layered. At best emotions can be conveyed, spinning associations that allow one to feel, because the openness to experiments is greater at the edge than in the cosy nest of the landlocked. IL MARE E LA TORTA captures ambiences/moods, which, assembled associatively reflect Sicily as an emotional state of mind. Goethe, Frederick II, the Arabs, the Mafia and the music of the “cake in the sea” allow between the tones to anticipate all of this island’s historical cultural layers, which made it the centre of the Christian world before America was discovered. It has turned out to be a political film. 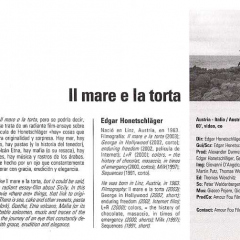 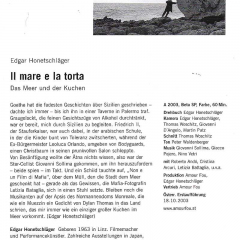 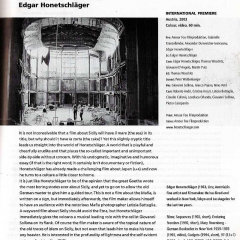 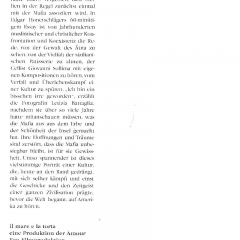 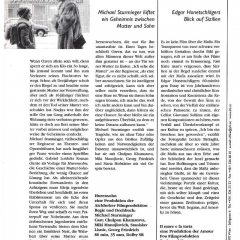 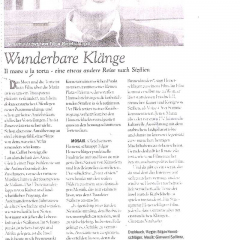 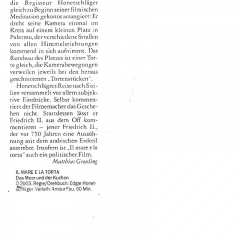 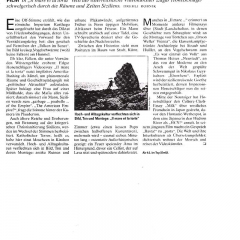 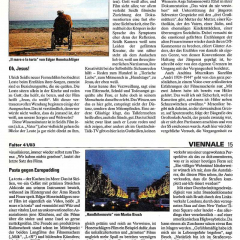 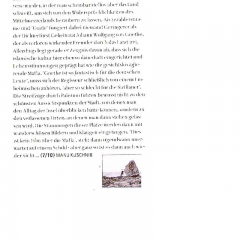 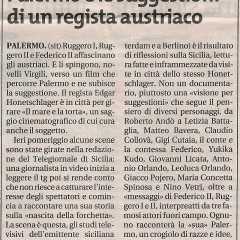 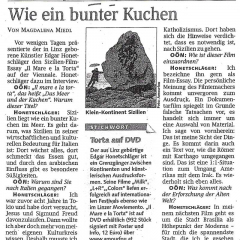 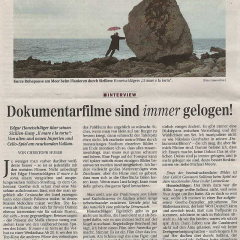 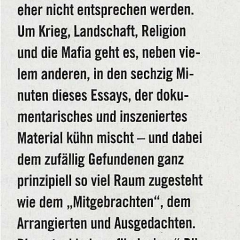 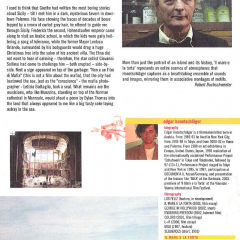 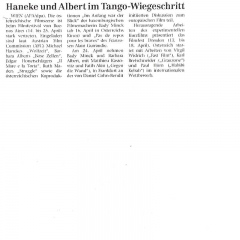 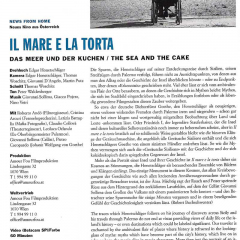 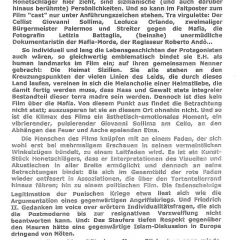