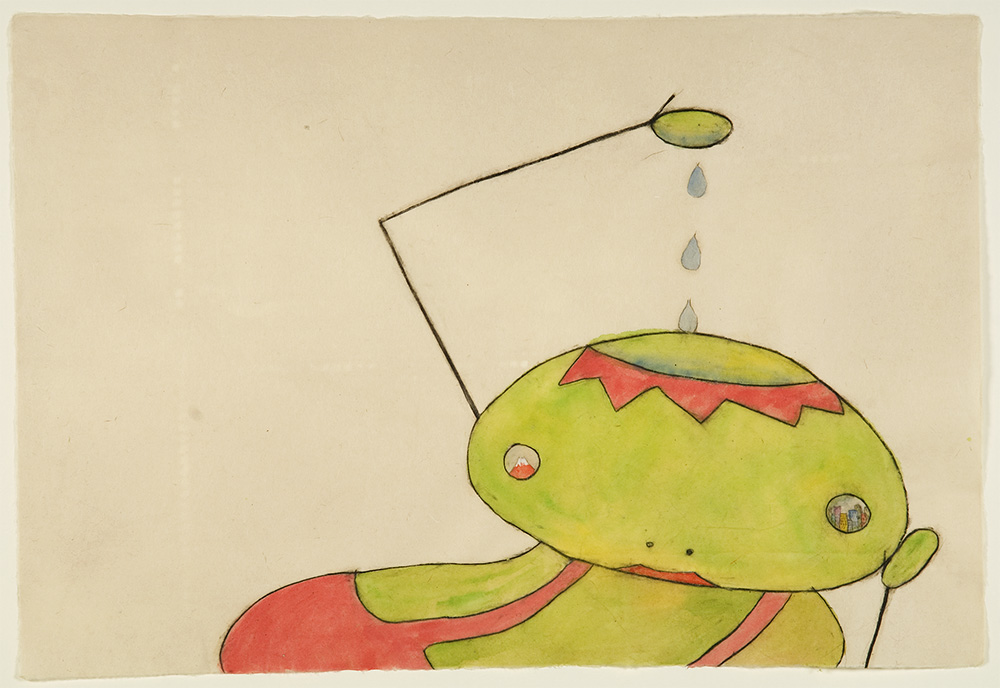 KAPPA kun is a water imp every child in Japan knows. For centuries artists and calligraphers have been depicting the mythological figure – up to our days. The Japanese – old and young – really believe that those water imps happily exist out there in the nature. Kappas punish as well as reward humans for good and bad deeds. Kappas have a “osara” in their head – a hole – that always must be filled with water otherwise they must die…

In “Kappa goes Tokyo” Kappa’s girl friend Koi-chan (carp girl) talks him into visiting Tokyo. He starts out liking the big metropolis since there are so many fun things to discover. Soon troubles start, as he meets all kinds of creatures he never saw before – including millions of other Kappas. His obstacle: where to find water in the city of concrete? After many adventures Kappa kun ends up in a bubble that takes him high up into the sky. At the tip of the Tokyo tower the bubble bursts! Kappa is in shock, but only for a moment, because the water imp learns to fly.

Half of the population of Tokyo was not born in the metropolis – as in any other big city on the globe. People come from the provinces near and distant to seek luck in the big city. As any other big city in the world most of its population comes from the countryside. The moral both in East and West is: Beware of the city! It will not do you any good! If will corrupt you! KAPPA KUN TOKYO HE tries to show exactly the opposite. A creature from the countryside comes to the big city and loves it. Withstanding all hardships he learns how to fly. The moral of this book is: If you move to the city the impossible becomes possible. The city does not destroy you, no, even a creature who lives in the water learns how to deal with another element: it learns how to fly.

Drawings and the texts were turned into a BOOK available in German language at schlebruegge.com

Below you get to see all the drawings plus 27 sound files in which the author recites the story that comes along with the pictures – in english language – click the red speaker symbols.