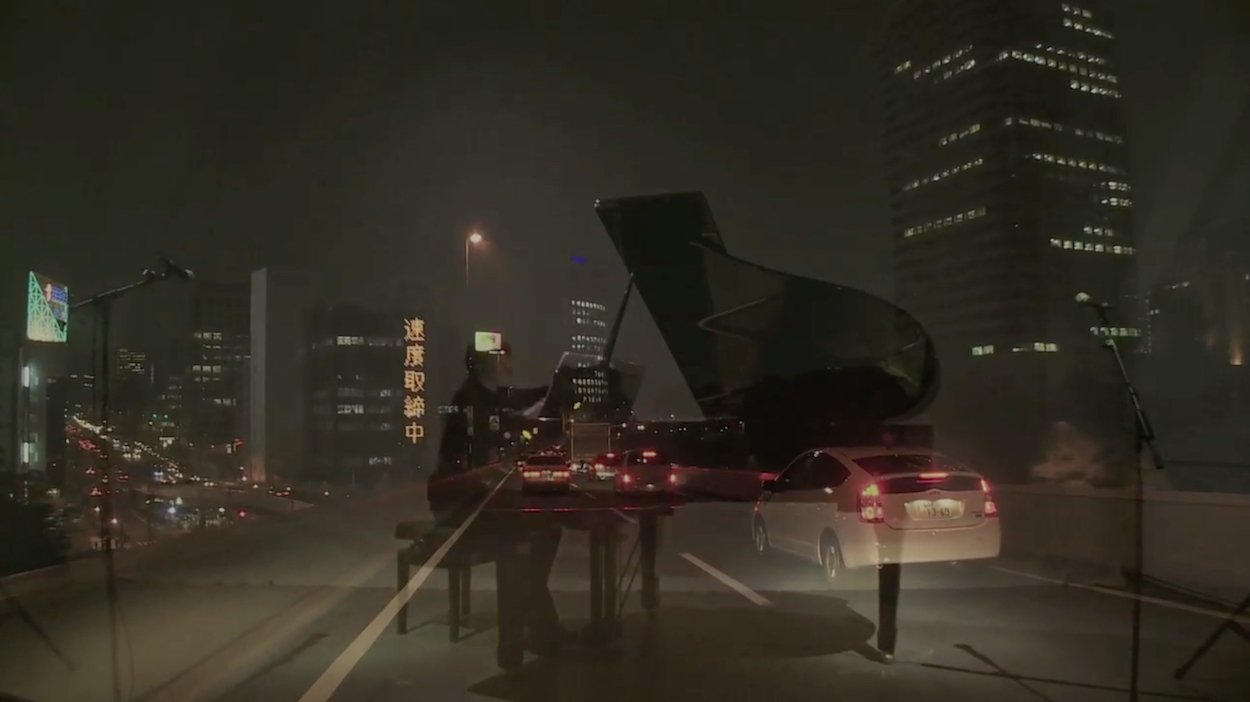 November 11th 2011 – eight months ofter the Tsunami in Tohoku Japan – we did a live performance at Charim Galerie Vienna dealing with the nuclear disaster in Fukushima.

Yukika Kudo is from Tokyo. Edgar Honetschläger called Tokyo his home for 20 years. Both artists were and are very concerned about the situation in Tokyo in the aftermath of 3/11 and the levels of radiation in Japan’s capital. The performance NEGATIVE SPACE took place at Charim Galerie Vienna. Combined visuals from their film AUN – the beginning and the end of all things, music by Christian Fennesz as well as two commissioned piano pieces: one by the composers Simone Santi Gubini entitled ‚Mit anderen Augen’, performed by Maria Flavia Cerrato. Another piece by Peter Ablinger entitled ‚Miro Marcus’ from his ‘Voices and Piano’, containing the ‘Proclamation of the European Environmental Criminal Court’ was performed by the pianist Yukari Kojeder, who was born and raised in Fukushima.

WE DECLARE THAT WE ARE ALL RESPONSIBLE: EDUCATORS, POLITICIANS, SOCIAL ORGANISATIONS, TRADE UNIONS, CHURCHES, FOR SAVING AND PROTECTING OUR MOTHER EARTH AND WE PROCLAIM THAT ANOTHER WORLD IS POSSIBLE. IN THE FUTURE OUR MOTHER EARTH WON’T HAVE TO LIVE THROUGH FORESEEABLE TRAGEDIES SUCH AS BHOPAL, CHERNOBYL, OR THE DESTRUCTION OF ECOSYSTEMS AS HAS OCCURRED IN MANY, TOO MANY, MARINE DISASTERS CAUSED BY IRREGULAR OIL TANKERS. WHOEVER HAS CAUSED INTENTIONALLY ENVIRONMENTAL DISASTERS SHALL BE JUDGED BY THE INTERNATIONAL ENVIRONMENTAL CRIMINAL COURT IN ORDER TO PROVIDE A CONCRETE PROTECTION OF THE ENVIRONMENT BY EFFECTIVE, PROPORTIONAL AND DISSUASIVE SANCTIONS.

Please have a look at http://www.blind-film.net as Yukihiro Shoda’s film ‘blind’ greatly inspired us.