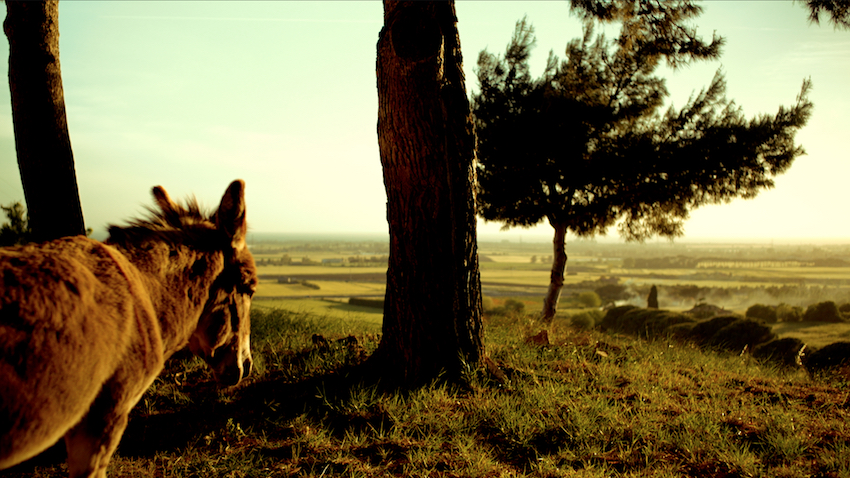 While sound asleep myriads of ants tenderly climb up a baby’s body and nurture it with grain. It will turn into Midas, the king who loved gold so much that he wished and was granted the golden touch – which eventually made him transform his own daughter into gold. How come a human that survives thanks to nature considers wealth leading to ultimate happiness?

MIDAS’ ANTS is a cinematic inquiry seeking the very moments of crystallisation in Occidental history at which our ancestors parted from nature. An anthropological and political investigation of the paths we took, permanently changing our concept of nature, ultimately ending in the Anthropocene. The film was shot in April and May 2021 in Tarquinia, Rome, Barbarano Romano, Canepina – all in the province of Lazio, particularly in so called Etruria, a part of Italy where the Etruscans used to dwell (see D.H. Lawrence’s Etruscan Places). A region full of mysteries and stories to be discovered. All actors were laymen. Dialoges are in Italian and Cornetano – a local dialect. May 2022 we finished post-production.

Midas’ Ants takes the audience into a surreal dream world whose foundation is based on a rather sad reality. Global Warming, the so called immigration crises, the current political havoc and the decline of our liberal democracies were transmuted into a witty movie in which common people are addressing philosophical, historical, scientific and anthropological issues. The film lends a voice to the very people who are hit the hardest by globalisation, global warming and decades of political failure. The characters have been carefully chosen according to their standing in life, their wisdom, their quirkiness. Some characters represent exactly who they are in real life, others are being transformed. The center of the movie is a hybrid – half Woman half plant – who shares her life with the donkey Balthazar (a reference to Robert Bressons’ film). As humans seem to have empathy for nature only when given human qualities both Flora and Fauna are having an equal voice.

The issues addressed come along light heartedly and are supposed to make the audience laugh, regardless the depth of the dialogues: antique Greek and Roman mythology, philosophy from Rene Descartes to Hegel via Baruch Spinoza to Giordano Bruno, poetry by Dante and Boccaccio…  Midas’ Ants does not follow classic narrative patterns. All characters and what they represent are intertwined forming vignettes that lead to a portrait of man’s current concept of nature and himself within it.

The project is supported by everyone participating, the Austrian ministry of arts as well as the city of Vienna.