Once upon a time there was a fisherman who rowed his boat up a river. As he came upon a beautiful peach grove he discovered a village behind it that had been cut off the rest of civilization for many centuries. People there were peaceful and loved each other. The fisherman wanted to stay forever, but as he longed for his family he decided to go back home. On his way he left marks in order to be able to return. Soon he was tempted to go back – but as much as he searched – he never found paradise again.

realised with the help of the Ministry of Culture Austria, ORF, Kulturland Oberösterreich, Japan Foundation

“I am happy if I can play around, people are sleeping. Meanwhile the traffic-jam. I wanna be like cockroach” says the girl while she rides on a boat through the canals of Tokyo located under three story highways. L + R is a a journey into past and present JAPAN, an essay narrated from A to Z by a young Japanese woman. She resists to see her world through the western directors eyes. time for her is – here and now. Digital directness and never shown PROPAGANDA FILM from the 1940’s (National Archives Washington) wave a colorful carpet of the love story (drama) between EAST and WEST, a man and a woman, L + R (election+erection).

Japan’s occupation by the allied forces is one of the most remarkable chapters of world history. There has never been any other occupation where so much attention was paid to political and social reforms and there are few other societies that were so much altered and remodeled in such a short period of time.

The Japanese (if such a generalization is admissible) have always tried to understand “others” but they do little to make themselves understandable, i.e. the common Western allegations on the utter collectivism, conformity and lack of individuality of “the Japanese” find a broad audience even in Japan itself. “Japan bashing” – a term coined by the Americans – as well as its consequences naturally express economic competition and even if all the pain resulting thereof is sometimes hard to bear, the defeated people may still retreat into the confirmation of stereoptypes. It is quite easy to adhere to the slogan “Nobody can understand us annyway” and as a matter of fact, neither hemisphere is really interested in transparency and approachability. Japan has succeeded in colonializing itself and thereby became colonialized more thoroughly than other Asian countries which were the direct victims of European colonization powers.

I subscribed to two Japanese newspapers for a longer period of time. Their reports focus, as elsewhere, principally on domestic affairs, then on the relationship between their own country and the USA. Asia as a trading partner, its politics and economic development is next on the agenda. Europe seems far away and if there are any reports on it at all, they mainly refer to extremes of various kinds, just as Europeans are usually confronted with similar reports on Japan. Judging from the image created thereby, I would  – were I not European myself and therefore knew better – never ever want to live in a place of that much violence, radical right-wing rabble-rousers and war. However, the same conclusion holds vice versa as well.

In the second half of the 1990s, Europe suddenly started to focus on Japan with an intensity I find hard to understand. It almost seems as if the prospering America of the 50s and 60s with all its extremes and its stimulating and intellectual significance has now been superseded by Japan, the big unknown. Up to the 90s, for instance, there were – apart from publications dealing with the economic giant NIPPON and with the exception of the classical writers – hardly any German translations of Japanese literature. Today, Japan can be found all over the media, people like to boast about their relations to Japan and it has become trendy to know what’s going on there.

It was and still is my intention to create an access to Japan which – out of my personal experience and without any didactic or schoolmasterish ambitions – brings about an image that relativizes the reported and learned. My performance piece “97 – (13 + 1)” shown in documenta X,  Kassel, Germany (curated by Catherine David) and the feature film “MILK” which had its premiere at the Berlinale 1998 are attempts to get an understanding of the West‘s perception of Japan. Furthermore they question the correctness of perception with consummate ease and try to observe the aforementioned extremes from different point of view.

L+R is another attempt to capture, seize and depict “the foreign and alien”. Trying to understand another culture through books or films usually brings about a rather dubious insight just as traveling abroad need not necessarily broaden one‘s personal horizon. We often encounter other cultures with preconceptions and when going abroad just search for confirmation of these preconceptions. Bernhard Waldenfels, a philosopher who devoted himself most exhaustively to the foreign and alien, writes that “the contingency of limited orders is the precondition for experiencing the alien, which – in a precise sense – means that something eludes the reach of order.” He refers to Husserl, who paradoxically defines the essence of the alien in the Cartesian Mediations, which go back to the Paris lectures of 1929, as “preservable accessibility in the original inaccessibility.”

L+R extends from “The Guest Who Stays” (Simmel) over to the typical tourist and finally to the specialist. By giving all of them a hearing I try to contrast and question their definitions of the foreign and alien and by doing so trying to stay away from the “explanatory” as much as a could. I did not want to bore my audience with the knowledge  concerning Japan, which I had the time to accumulate throughout the last decade. For me it was important that the outcome would be as light and refreshing as possible and either cinematography or certain scenes give the “outsider” pleasure and joy.

For me the film is an essay in the sense that it does not try to convince anybody that the filmmakers angle is by any means objective. Yukika’s and my struggle with our so called “interracial relationship” and how we are trying to solve it gives the film the structure it might have otherwise totally lacked. As a matter of course, L+R reflects my personal situation as a wanderer between the cultures. However, I do not intend to “explain” the world from a cosmopolitan’s point of view, but rather show that the number of unsolved questions and enigmas constantly increases the more one exposes oneself to an alien culture. Humorously and without cynism, I tried to make different realities tangible and go into positions that are rather dubious to me. By questioning the position of the expatriate, as well as of all other travelers, wanderers or those who remain at home, my own existence also becomes an integral part of this caleidoscope where so much is left to be learned.

Most of the archival footage used, is taken from the national archives in Washington. Propaganda films from both sides of the Pacific. Some of the Japanese footage was used in the Tokyo trial after WW II and served to hang Japanese war criminals. I manipulated this footage strongly and turned its meaning upside down.

1) SPIRAL and VOICE — According to Maurice Pinguet (“La mort volontaire au Japon”) the emperor (Tenno = heavenly souvereign) spoke to his people in a radio speech aired on January 1, 1946, , telling them – upon pressure of the American occupation forces – that he was no longer considered to be a god. He denied the old, once harmless myth, which the military fractions exploited for their own purposes, in order to submit to the state. The death of God: The sense of emptiness which characterized the oczidental conscience from Diderot to Nietzsche and Hegel, took its time to show its continuous, indirect and imperceptible effect in two or three centuries. The Japanese were suddenly struck with a similar crisis and – since during post-war depression there wasn’t anymore time for further reflection – within a couple of weeks had to accept and internalize a situation which the Europeans took three centuries to put up with.

This material was not to be found because the Japanese deny – against everything I read from Western scholars – that the emperor himself ever went on air. According to NHK the emperors declaration was only printed in a newspaper. Therefore I had an actor fake the former emperors voice.

2) While a man sweeps the grounds of a temple the voice of the American ambasssador to Japan in the late 1930’s is to be heard : he states that the Japanese are not to be understood and that they are 2000 year out of date.

3) In a film by the Nazi director Dr. Arnold Fank, a Japanese playboy has a hard time to decide whether he is going to have Western drinks or Japanese Sake. The Americans took the footage and manipulated it by using an American overvoice. In the context I use the material the manipulation goes one step beyond. 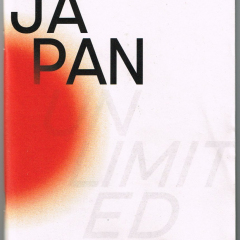 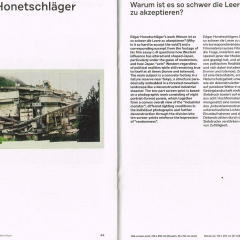 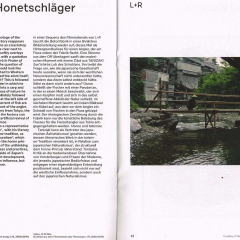 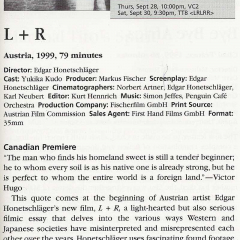 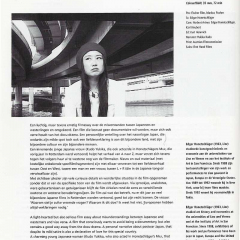 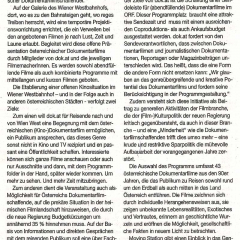 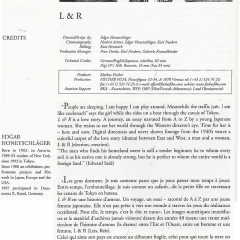 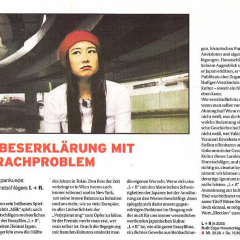 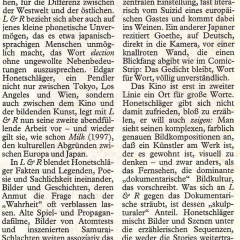 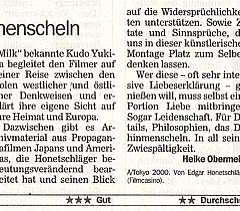 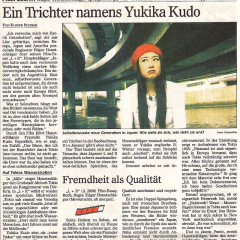 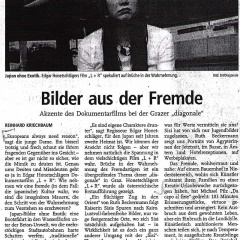 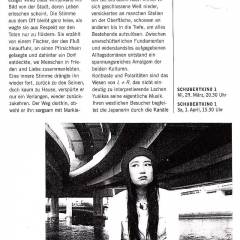 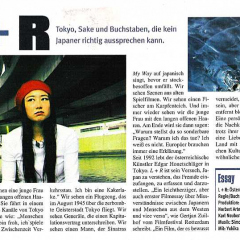 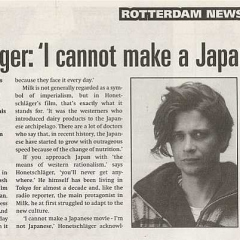