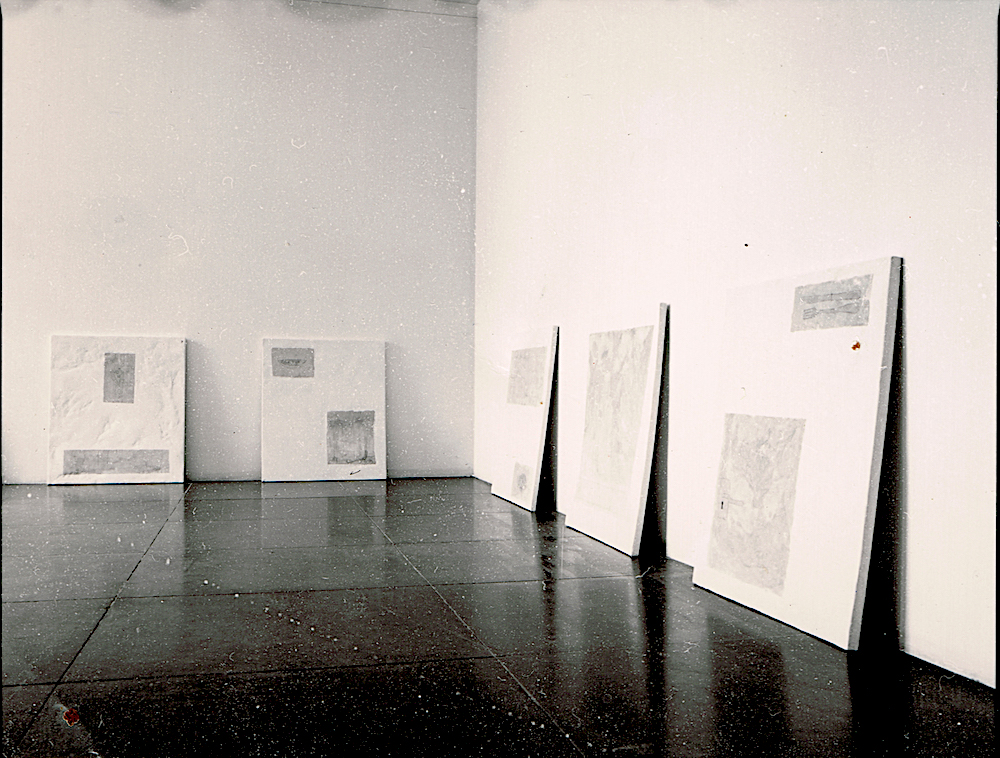 1989 I moved from Vienna to NYC. I shared an apartment with James Goldwasser and Karin Sander in Brooklyn and there I came about a book about Ludwig Wittgenstein’s house in Vienna. I learned about the philosopher’s planning of his sister’s house, which he had taken over from infamous architect Adolf Loos, further about the process of planning and Ludwig’s manic precision – which lead me to read him. Back in Vienna I visited and succeeded in convincing the Bulgarian attache (the palais is owned by Bulgaria) to let me do a show there in reflection of Ludwig’s architecture. On my stroll through it I discovered a small square of Stucco Lustro (a method to cover walls by means of gypsum and wax which let’s the surface appear like marble). Eventually I realised that the new owners had overpainted the exquisite plaster-cast thoroughly except a tiny square serving as a reference to the original Stucco. I decided to do a show at the house and invited Elisabeth Plank to join me. 1990 we turned out to be the first Western artists to show at the W’s house since the Bulgarian embassy had acquired for cultural use. By doing so they had saved the house from destruction!

I went down to Venice to learn the ancient technique of Stucco Lustro, then I cast gypsum in flat 100x100cm squares. With a pencil I drew both a detail of Wittgenstein’s design and an everyday gadget the Wittgenstein’s might have used on the plaster’s surface and then I covered the depiction with wax square, like the original left in W’s salon. The plaster-plates, leaned against Ludwig’s walls, were meant to corresponded with Ludwig, a dialogue between a philosopher gone architect and and young aspiring artist who admired him deeply. The gypsum-plates evoked a dialogue with the past, both in terms of W’s architecture and my standing in the world. But also as in what had happened to W’s family during fascism and me – luckily born long after WWII – who discovered the master’s mind not in VIENNA, but at a jewish friend’s house in NYC.

In my first feature Film MILK 1997 I had four Japanese businessmen quote Ludwig Wittgenstein in Germanon their morning subway ride: “Dass die Welt meine Welt ist zeigt sich darin, dass die Grenzen der Sprache, die Grenzen meiner Welt bedeuten.” (the limits of my language mean the limits of my world). A sentence that became programmatic for my work, yet I have always tried to go beyond those borders.